If you’ve never heard of Margaret Atwood , welcome to the planet Earth. Please allow me to show you around. I jest, but the woman has nothing short of 40 major works under her belt, ranging from dystopian fiction, to children’s books, to literary criticism and other non-fiction books on writing and even has a show on Hulu based on her masterwork The Handmaid’s Tale. It’s enough to make you question what you are doing with your life. (Not enough, apparently.) So when I read that she was prepping to release a title for Hogarth Shakespeare, a series of modern re-tellings of Shakespeare’s classics, I immediately sold my book club on it and eagerly awaited its release date.

Hag-Seed is Atwood’s modern spin on The Tempest, the genre-defying tragicomedy that is believed to be the bard’s final play. In it, the betrayed sorcerer Prospero, trapped on a deserted island with his young daughter Miranda, erects a storm at sea to exact revenge on those who have wronged him. Yet, Prospero is no innocent victim that audiences wholeheartedly root for. He is deeply flawed- controlling, ego-maniacal, petty, callous, and cruel at times. Throughout the work, he plays puppet master with the elements and life on the island, eventually achieving his desire, but is still not altogether content and seeks forgiveness and redemption from the gods (and the audience) for the tortures he has inflicted upon others. In Atwood’s spin, Felix, a disgruntled former artistic director, well-known for his extreme interpretations and performances of classic productions, plays our modern Prospero, in all his narcissistic glory.

As a protagonist, Felix is not an easy character to like, nor should he be. Like Prospero, he must grow from a completely self-absorbed master of his art into a being who makes decisions based on the well-being of others. Thus, the further one gets in Hag-Seed, the more one comes around to old Felix. What is particularly endearing, especially to my book club crew of English teachers, is Felix’s transformation from ivory-tower elite artist to humbled prison theater teacher, thereby beginning his substantial character arc and creating another “play within a play” for readers.

If you’ve never read The Tempest, fear not. Atwood does a great job of referencing it throughout the novel in a way that is helpful without being irritating and even includes a full 5-page plain English synopsis in the back of the book, for those who are so inclined. Though this was not my favorite Atwood novel- I absolutely adored Alias Grace and was thoroughly creeped out by Oryx and Crake– it is still quite good and I would certainly recommend it, even outside of literary buff circles. 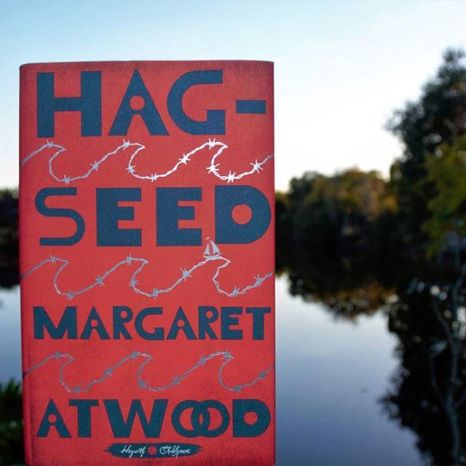 Writers gotta read.
Beautiful written and painfully relevant.
Follow the evolution of The Quiet Despair of Orchids! Link in Bio.
A little structure and motivation to keep this absent-minded professor going.
New Blog Post
Where do you write? 📚✏💻📒✒📓 I am thoroughly inspired by nature and write almost exclusively outside. However, this is where I park it when weather and/or kids do not permit.