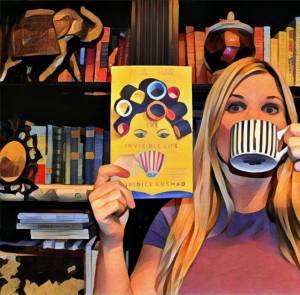 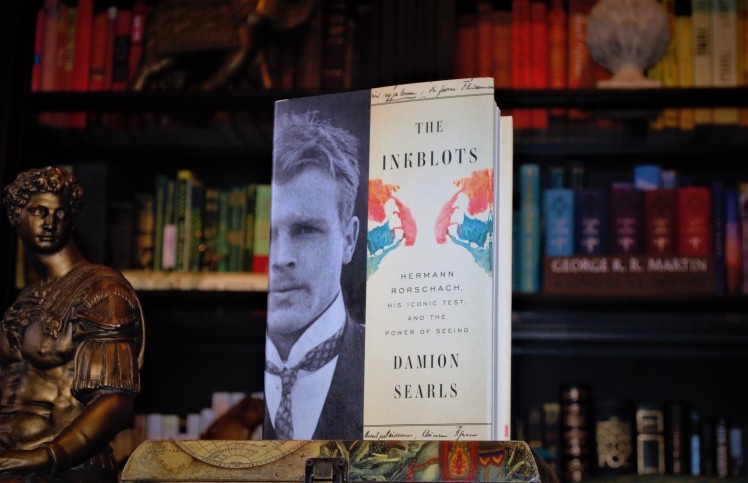 I find it of prime importance (especially for those of us who’ve been out of college for more than a few years and have no professors to assign us texts to read) to delve into thought-provoking non-fiction. For every two novels I read, I like to explore an interesting argument-based work, not to say that fiction isn’t argument-based, but the argument and evidence are certainly presented to the reader quite differently. In The Inkblots: Hermann Rorschach, His Iconic Test, and the Power of Seeing, author and translator Damian Searls immerses readers in the life and times of the young and brilliant psychiatrist behind the famous inkblot test, providing an up close and personal portrait of the idealistic artist/scientist/genius.

Before we go any further, I’d like to judge a book by its cover and attempt to convey to you what a beauty of a tome this is! While Rorschach’s portrait is beautiful in and of itself (a mix of Brad Pitt and Robert Redford, as remarked by the author), the inkblot design and colors are equally arresting and the cover material has a rich, pearlized texture to it. This book would definitely make  for a great gift or display piece!

Searls’ presentation- the very first complete biography of Rorschach- is fascinating and extremely thorough, without being tedious. He leads us through the early days of young Hermann’s fairy tale childhood (which is cut short rather unceremoniously) and the beginnings of the genius mind at work. Complete with excerpts from letters and diary entries, Searls reveals what is likely the catalyst of Rorschach’s burning interest in medicine and psychiatry, as well as providing us with many a scene of an artistic Hermann- painter, reader, philosopher.

Without unearthing too many of the book’s hidden gems, I found the discussion of cattiness and manipulative actions of some of psychiatry’s greats, such as Carl Jung- described as somewhat of a spoiled, rich playboy- to be quite surprising and illuminating. Other great scientific and literary minds such as Leo Tolstoy and Sigmund Freud also make appearances and it is quite amazing to visualize these men living and interacting. Rorschach is also argued to be quite the feminist and champion for women’s rights and for quality care and respect for the impoverished. I suppose I assumed he’d be cold and scientific, but Searls’ biography paints the picture of a sensitive, impassioned advocate for all.

The Inkblots is an inspiring work, rife with tragedy, surprise, and resilience. Hermann Rorschach’s short but incredibly important life, previously a relative mystery to us, no more than a footnote in history books, is richly and beautifully laid out, explored, and celebrated. The Inkblots is both a vivid and intriguing history lesson and an inspirational narrative of perseverance and the amazing capabilities of the human mind.

(I received an ARC copy of this book from Penguin Random House in exchange for an unbiased review.)

9 gothic novels to read/re-read and write style analysis essays on 🌈👻❤️ #mastering #creativewriting #bookstagram #writer #writersofig
I miss the carefree simplicity of unstructured summer days. #writeordie #writersofig #bookstagram
My friend @emmett_writes wrote a magically transcendent collection of poetry and my Hamlin Orange tree approves.
This book is the cornerstone of my inspiration to write! I love Toni Morrison's ability to make awfulness both beautiful and magical.
Mountains and writing rocks ftw!
Validation from my kick-ass professor ❤️. Writing a southern gothic is no joke and I often question if I know what the hell I'm doing!